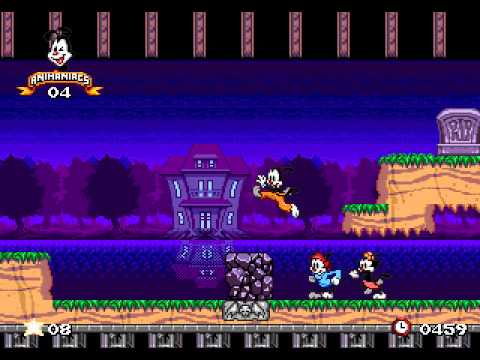 Growing up, I used to watch Animaniacs every weekend – and I loved it!
Hell, my family loved it! The jokes were great, the voices well done and the characters were likeable! I even had the episodes recorded on VHS. (Yes, I lived in a time where VHS and tapes were commonware)

This game lets you take control of the three Warners, Yakko (has a paddleball and is able to push and pull boxes), Wakko (Has a large mallet, which can crush rocks and light bombs) and Dot (Able to infatuate certain targets), trying to collect certain movie props for their shop. However, it’s not that easy…

The game has 5 levels, called “Studios”, which are split into smaller parts.
There are also secret roulette games, which I show 2 of.

And yes, I am playing semi-blind in this, meaning I haven’t played the game in a long while, and nearly forgot a few parts, like a part in Studio 3 where I do a pretty bad mistake and had to sacrifice a life to try again (Even though I could have walked back a bit, then come back to make it reset. Oops. And I accidentally save stated when I figured out what the hell I did wrong. Double oops.). That, and I used too much time on the 3rd Studio’s boss. Sorry in advance!

Anyway, the controls are pretty responsive, and the graphics are in the spirit of the cartoon. The music is cool, and the challenge is pretty hard at times.

Well, good night everybody, and have fun watching the longplay!