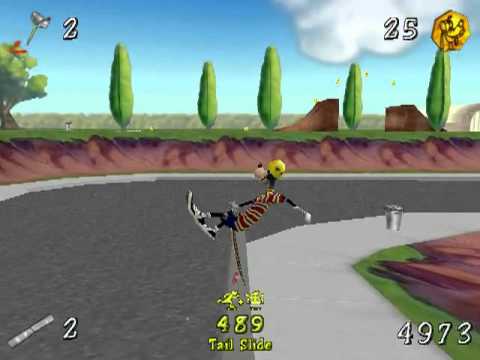 Remember when you could get a game demo inside a box of Kellogg’s cereal? Back in 2001, Extremely Goofy Skateboarding was one of those demos, and I was one of the kids that begged Mom to buy a box of cereal just so I could get my hands on the game inside. (OK, not really, I actually don’t know where I first got this game, but it sounds about right.) Now that I have the full game 12 years later, I have mixed feelings about it. Yes, it brings back many childhood memories and has a mostly great soundtrack, but the controls are annoyingly insensitive and the graphics are poor. The game has an odd framerate cap of 21, and has no graphical options whatsoever. You’re stuck with 640×480 resolution, 16-bit color, and a short draw distance. As a result, this game can run on a figurative potato, so it won’t gulp power when you’re away from your charger. If you played Goofy Skateboarding as a kid, it won’t hurt to relive your younger days on a netbook. Since the game is hard to find, here’s where I got it: